While it's true that the re-entry into the semester isn't the easiest thing in the world, it's also amazing how easy it is to slip back into the routine of it. Perhaps this is to do with the fact that I've had pretty much the same schedule for the past 5 semesters or so, and so now, even after the months without the schedule in the summer (I've decided I'm never going to say "summer off" again, as if I don't want people to imagine me off lazing on a beach then I really shouldn't give the impression that I am) the schedule of the semester actually feels "normal" after just a day. Apparently, the same is true for my darling little Man-Kitty, who's back to his normal routine, including begging me for treats as he sees that I'm attempting to get my crap together to leave the house. Spoiled little shit. He is cute, though. How could anyone resist his charms? I think people who don't find him utterly adorable might have something wrong with them.

I mean, look at him! He's all Back-to-School Man-Kitty! Bookish and regal one moment, attempting to steal away in my book-bag the next! 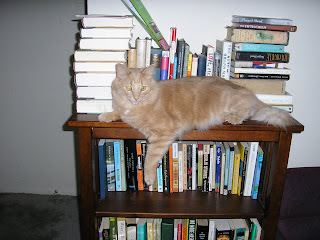 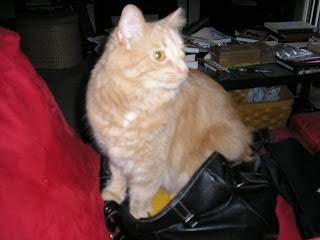 My orange tabby does the same thing.

When I am packing for real (i.e. have the luggage out) he climbs in and pisses in it so I can't leave.

Yum, books! And such a cute kitty!

They're cutest when they're driving you nuts. They know this. It's an evolutionary protective behavior.