The Adorableness Runs in the Family

I'm not sure if I ever told the story of my glorious Man-Kitty, of how he and his brothers and sisters were abandoned by their mama, of how they were rescued by a colleague of mine, of how I made the fateful decision to open up the email with his cute kitten face that made me decide to bring him into my family. But I thought you might like to see my glorious Man-Kitty's brother, the one kitty from the litter that my colleague chose to keep. 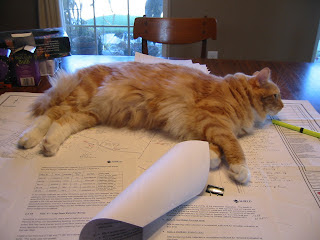 As you see, the gorgeousness runs in the family (although I must say that I think that my little Man is more gorgeous, even if he's not rocking the white boot look, but then, that's because I have adopted him and I am partial to pets of my own). Apparently both kitties are similarly chatty as well. Man-Kitty would like me to tell you all that he is happy to hear that his brother thrives, although he also feels that he should be the center of attention at all times and so you shouldn't get used to seeing pictures of this interloper in this space, which he considers his own. Man-Kitty is a very territorial cat.
Posted by Dr. Crazy at 1:34 PM