Another Busy Day Ahead, and Looking for Feedback on Hair

But I have vowed that I'm not going to use the blog for a to-do list today. To-do lists are boring for everybody, and it's really not fair for me to bore people who read what I write. That said, while I do feel like blogging, I don't really know what to write about. I've tried like three different Topics, and, well, nothing is really working. So perhaps I'll blog later, or perhaps until all of this crap of mine is done I'll be on a mini-blogging-sabbatical. Like for a day or something ;)

In the meantime, I've got a hair appointment on Thursday, and I'm not sure what to do. I've been growing the hair out for like a year, and quite frankly, I'm getting bored. However, I do like the haircut I've had for the past few months in theory - I may just be bored and sick of it because I really need a trim. So I'm not sure what to do. (By the way, I'm not doing color this time around, so changing the color isn't an option for making me not sick of my hair until like March.) Perhaps you all can help? Here are some pictures of things I'm considering.

First, my hair is pretty much in a version of this style right now. The bangs are slightly less heavy, and the hair is maybe an inch shorter, but that's pretty much the current state of things. I keep finding that I am constantly putting it up, but again, this may just signal that I'm in desperate need of a haircut.

Another option would be to begin growing the bangs out (wouldn't be so terribly hideous since they're not quite as heavy as the Moss's above) and make the bottom of the hair more blunt, heading into this style:

Or, another way to go would be with something more asymmetrical and to keep a bang, like this: 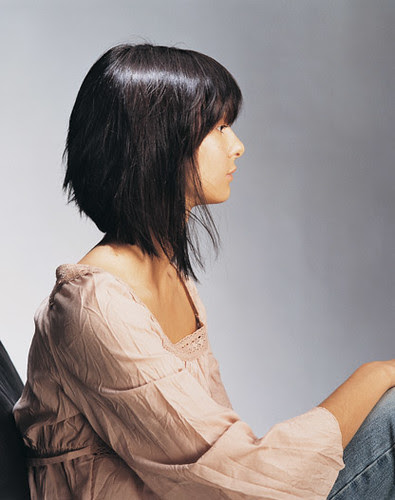 Or, finally, I could just say fuck it and go shorter, although I really had been saving that for spring. I feel like March or April would really be the time to do that, but maybe I am wrong? Perhaps I should go shorter for the new year?

So. Those are the options that I'm considering. What do you think?

I've had the asymmetrical bob with bangs (with the front about as short as in the Kirsten Dunst pic) for about a year and a half now, and I LOVE it. It looks good on a lot of faces, and if you do it short it will continue to look nice as it grows out (which a blunt cut might not).

That asymmetrical hairstyle is really cute!

i have the assymetrical cut and while it's cute, i am constantly puttingit up/taking it down. it's a necessarily weird in between length in order to get the sweepy effect. i say chop your bangs a bit and stick with moss.

New Kid on the Hallway said...

You know, I have to say I don't like the Zellweger (though that might be because she herself annoys me so intensely?) - it looks really heavy on the bottom, and also ironed to death. I like the asymmetrical cut a lot, though if one is like me and does not have the neck of a swan (sigh), it might look a little different than on the gorgeous model. (I am such a sucker for deciding I want a certain haircut when really, I want to look like the haircut model.) I like the Dunst a lot! Perhaps grow the bangs out for the Dunst look a bit later in the year?

(I face a very similar dilemma - I'm getting my hair cut [and colored, yay!] on Thursday, and I don't quite know what to do with it - the bangs got long enough that I think I may commit to growing them out, because it won't take much longer, and I figure I might as well see what it's like, because it's not like I can't cut them again in a heartbeat if I decide they don't work. But I can't figure out what to do with the REST of it. Sigh.)

I like the asymmetrical cut, but I'd get it shorter than the one in the picture. If you're like me, you'd still just put it up. I recently went from long to short, and I did the short asymmetrical thing. It's great. I can't really put it up, but I can still put it behind my ears. It's short enough that it doesn't bug me or get in my way. Oh, and I don't have bangs. Too much of a "cowlick" for that.