Another Day, Another Dollar

So I could have been accomplishing things this morning, but I decided not to. Must get ready to go to school, though, momentarily.

A bloggy administrative note: some have continued to comment on The Post That Shall Have No Name, and because it's now an old post, those comments are going into moderation. I've been deleting those comments without reading them because I want that particular comment thread to be done. The "not reading them" thing is because I don't want to be tempted to delete comments that irritate me and to post ones that don't. So if you're not seeing late comments appear, this is why. Also, let me just say that this is not because I don't want conversation to continue around the issues in that post and comment thread - just that I think everybody needs a bit of a breather after the hullabaloo of last week - or if everybody doesn't, I totally do. I've got something in the works with a couple of other bloggers that will be a continuation of the conversation, but it will take a few weeks to get it together because we're trying to be more thoughtful about how to get the conversation going - both between ourselves and ultimately within the comments - than I was in The Post That Shall Have No Name. If you don't know what I'm talking about in this paragraph, lucky you :)

Today promises to be a long one for me, as Thursdays always are. In contrast, a certain Mr. Stripey will have a relaxing and awesome day, as this is what he has had every day of his privileged life. He's a totally low stress sort of cat. Just check him out: 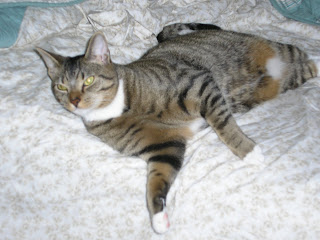 Wow, he's gotten so big! I still love his little "zipper" on his tummy!

Exactly what I was going to say! What have you done with the wee little Stripey? (But he's still adorable!)

Odd--I just noticed that the first three letters of my word verification below are "cat"!

He has a vet appointment coming up - I will not be surprised to hear if he actually weighs more than M-K. (And then to be lectured by my vet about feline obesity, even though I think he seems to be just the normal size for him as far as I can tell.)

What's hilarious is that it is not unusual to find both of my cats in the bed lounging on their sides or full on their backs totally stretched out like that. I believe the idea is that if they lie in that fashion that it will inspire passersby to rub their bellies.

Oh, my vet has lectured me on feline obesity, too: Joey is 16 pounds of Maine Coon muscle, but he IS developing a beer belly;-)

I think Mr. Stripey is beautiful!

Such a cute kitteh! I love his little snow shoes.

He's all big and grown up!! But still cute!

I am loving the cat pictures. Mr. Stripey certainly has grown into a handsome kitty!

Mr. Stripey is gorgeous. But he looks as if he's about to get into some mischief. Don't want to sleep too soundly, do we now?

Obvious consensus that Mr S is magnificent; what we now need is a pic of M-K and Mr S both lounging so that we may all envy them and do virtual tum-rubs.