So. Yesterday I was supposed to begin writing. I really had every intention of doing so. Like, for serious. Except... ok, so here's the thing about me actually doing the writing. I cannot attempt to violate my natural writing rhythms. Not at the beginning of a project. So I had this grand ambition that I was going to awaken and just begin composing yesterday, and that was stupid, because you know how people say you should "write first" before doing anything else? I know that doesn't work for me. Know it. Have had problems every time I've tried to do it. I know that what I should do if I really intend to write is to wake up, ease into the day with coffee and some reading, make notes about what I plan to do over the course of the day, and then, somewhere around 3 hours after waking up and after some lunch, then I should begin. And I will then accomplish as much in just a couple of hours as it might have taken me all day - or even a number of days - to accomplish.

Anyway, the point here is that yesterday was a wash because I was trying to pretend that I'm a different writer from the writer I actually am, and so somewhere around 7:30 last night I decided that today I would just go about it the way that feels comfortable and not the way that feels like how I'm "supposed" to do it. And so. I woke up, drank a pot of coffee while reading some things, made some notes, and then had lunch. I retired to the Nook at approximately 1 PM, at which time I sat down and organized 3 different conference papers that should form building blocks for the current chapter, and then after doing that I began writing. Rough writing. Not the kind of writing I'd ever show anybody. But I wrote. I wrote 3 brand new pages, and jammed into that three new pages are 4 other pages of stuff that once revised fits with what I'm getting at. Now, of course I need to do things like add critical context and to theorize what I'm doing and whatever, but the point here is that I have begun, the world has not come to an end, and I'm feeling totally good about the direction in which I'm headed. In large part, I think that my success does have to do with the Nook of Ideas. Which I just realized I've not shown to you all. here are some pictures.

First, the view to the right from my chair at my desk: 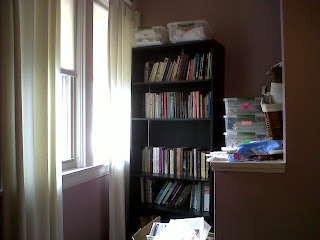 And then, looking at my desk from the doorway into the Nook: 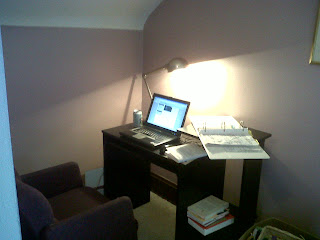 Another post will be forthcoming in a bit... I did want to write more about the literary criticism stuff that I brought up a post or two ago in response to comments and in response to some further thinking about it on my part. But I need to make some notes for tomorrow before I lose momentum, so that will have to wait.

(Oh, and before you ask, Comrade Physioprof, there is a space below those books on that shelf of the desk where the MFJ can reside, should such measures be in order :) )
Posted by Dr. Crazy at 2:44 PM

I, too, am having trouble finding my groove, and my groovelessness is now exacerbated by the knowledge that july is almost over omg!

Maybe if I clean my office, I'll feel better. That can be one of my three things for today, along with finishing one chapter of a long-ass information-dense book, and roughing out a syllabus.

AHAHAHAHAH! I was getting ready to chew you out, until I reached the last fucken paragraph!

Nice nook! Knowing how you write and respecting that process is key. You've earned it. You wrote one book already.

There are some people who stop at one book. But, my guess is that once you've written one, you'll write another. (At least, it not as much a limiting factor as having written zero books.)

Wow, what a small and organized desk you have, mine is waaaaaay bigger (dining table size) and usually covered in articles, lying in a circle (NOBODY may touch that!) around my laptop.
You have obviously developed way senior writing manners than me,especially with the MFJ close at hand, that is new insight!

CPP, roll your cursor over the dots in the message. Each of them is a hyperlink to a different spam site.

Dr. Crazy, I love your nook, although it looks more like a writing cave. You can see just enough of the window to know if it is day or night. My only criticism is that that chair looks too comfortable and too low. Or is the Comfy Chair the only thing keeping you away from the MFJ?